GesPress is the system that would control the computer application with the motion of the hand. GesPress consists of the software part (Python code) and the hardware part (including sensors, A/D converter and Raspberry Pi). The hardware part would detect the presence of the hand and collect corresponding data. While the software part would perform different reactions based on the signal detected from hand motion. For now, GesPress can control presentation slides and music players, including local players and online portals like YouTube.

To control the presentation, professors make the hand available for pressing buttons, touchpad, or remote device. Team AD thought of a touchless interface composed of Raspberry Pi and sensors for hand-free presentation control. The world has been revolving around the touchless interface today and creating hand-motion control for presentations during classes was just a minuscule part of the bigger idea. This study has focused the energies on solving real-time issues. GesPress can potentially be a part of the automated infrastructure systems and can improve the lifestyles of users. Therefore, the device can contribute to the ongoing research on cutting edge technologies.

The concept behind the phenomena of interest for the project is to line the bridge between sensor measurement data and humane-characteristics based on spatiotemporal proximity. The use of sensors in the project aids in using real-time data to manipulate analog outputs and channelize that into understanding user’s demands and following people-centric commands.

Sensors are devices that can convert non-electrical signals to electrical signals either directly or via several steps (Fraden 2010). The project can be devised using various sensors. The physical principles of the three kinds of sensors that can be used have been described below:

Photosensitive Light Sensor (LM393) works through the light-dependent resistor (LDR). LDR is a semiconductor device that changes its electrical resistance depending on the presence of light, its resistance can reach several thousand Ohms in the dark, while only a few hundreds of Ohms in the light (MySensor 2019). According to Figure 1, when ambient light intensity does not reach the threshold value, the module DO port output high; when the ambient light intensity exceeds a set threshold, the D0 output low; digital outputs D0 can be directly connected with the microcontroller through the microcontroller to detect high and low, thereby detecting the light intensity changes in the environment.

The specification of Photosensitive Light Sensor (LM393) is extracted as below, 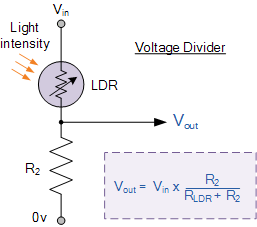 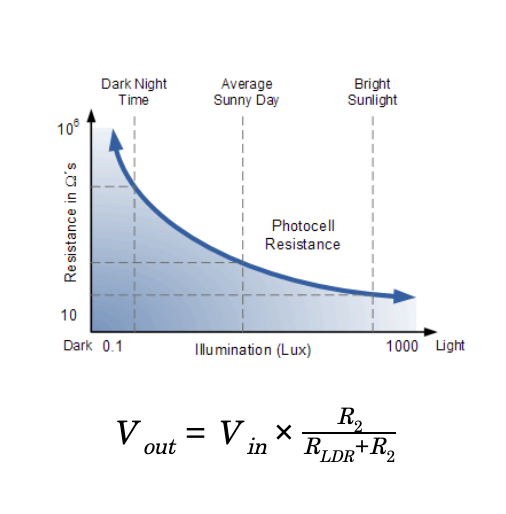 This project makes use of an Analog to Digital Converter(MCP3008) for signal processing and conditioning with 8 channels and 10 Bits precision. The below figure shows the numbering of the pins on MCP3008 looks. 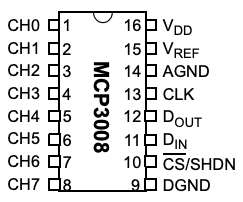 The working of ADC has been explained below:

The block diagram describes the broad working of an ADC. It performs two functions, sampling and holding, quantization and processing of the digital output. The quantization process can either be performed by analog integration, digital counter, and successive approximation or direct conversion in Flash types (Wai Li 1984). Further, the digital output data is served to the CPU or gets directly stored in memory. In the output of S/H, a certain voltage is present. A numerical value is assigned to the voltage in correspondence with its amplitude (Wai Li 1984). It is in the limited range of possible values given by the power of 2 i.e 2^n (28 = 256, 210=1024, etc). Once the closest value is assigned it is encoded in the form of binary numbers generated by the quantizer, that are represented by ‘n’ bits (Wai Li 1984). Post this the digital signal is again converted to an analog output for the user to interpret the frequency response and record sensor measurements. The choice of integrating the ADC with MCU chip or another stand-alone Integrated chip is subject to change as the interface demands (Wai Li 1984).

To process the hand motion signals, a short series list of data samples, which can refresh itself continuously after its store is full or for some certain demand, is created. The length of the series is defined as the operation time range for single hand motion.
In this way, the sequence of hand presence information can be recorded on the list and processed.

The first voltage analog output representing the light intensity value of the environment is stored as an initial value with an assumption that hand is not blocking the light. Then, the difference between the initial value and the measurement is calculated.

After the difference is measured, the filtration of the data proceeds. It is possible that the brightness of the surrounding environment can be changed due to external factors. The small changes in the brightness of the surrounding environment due to the external factors are considered as the noise. Therefore, the code checks the difference between the initial value and the measurement. If the value of the difference is less than the certain arbitrary number, the code determines that the difference is due to the external factor, eliminate the value, and append zero to the list. If the difference is bigger than the certain arbitrary number, the difference is appended to the list. The overall list can give the information of the time length and specific time of hand covering the light sensor. With two light sensors settling separately on the left and right side, there are two lists of data providing information about the sequence of hand covering two sensors. Therefore, a simple instruction based on the hand motion can be executed by this interpreting process. Similarly, there will be more information input with more sensors, and thus more complex motions and executions.

The experiment is conducted to test the photosensitive light sensors to implement hand-gesture based control for the project. Initially, the team tested only one sensor to check the analog output and the sensor sensitivity. This was done to make sure that the light sensors could successfully capture the hand gesture. One photosensitive light sensor was connected to the Raspberry Pi. On moving our hand above the sensor, the light detected by the sensor is reduced. This corresponded to a jump in the voltage.

To detect a hand motion (gesture), more than one sensor is required. After the first experiment, the team added another photosensitive light sensor to the circuit. Simultaneous readings from two sensors are used to detect hand motion from right to left or left to the right direction. Additionally, the setup was enclosed in a box to reduce the influence of ambient lighting on the sensors and minimize noise from the ambient atmosphere (vibrations, wind, heat, etc.).

The experiment is conducted to make the system detect the hand motion successfully. Two light sensors, Raspberry Pi, A/D converter, and python code are used to create the system. The difference in the analog voltage output values between the initial value and measurement is appended to the list of the sensor. The list has a fixed length of three. Hand motion is detected in the code by comparing the first and last values of both lists. The system is not detecting the hand motion properly, and the modification of the code is needed.

The experiment is conducted to modify the code used in Experiment 3 to detect the hand motion successfully. Method and Procedure are similar to Experiment 3. Unlike Experiment 3, the list does not have fixed length but have a maximum length defined by time.sleep value and maximum time of hand motion. The system detects the hand motion correctly except when the hand moves quickly.

The requirements for the box are:

To meet these requirements, the box consists of two compartments that can be easily disintegrated. The top compartment houses the entire circuit and the sensors are attached to the bottom part of the top panel. This ensures protection from the ambient environment. Moreover, the box is made up of wood to prevent thermal and electric conduction. 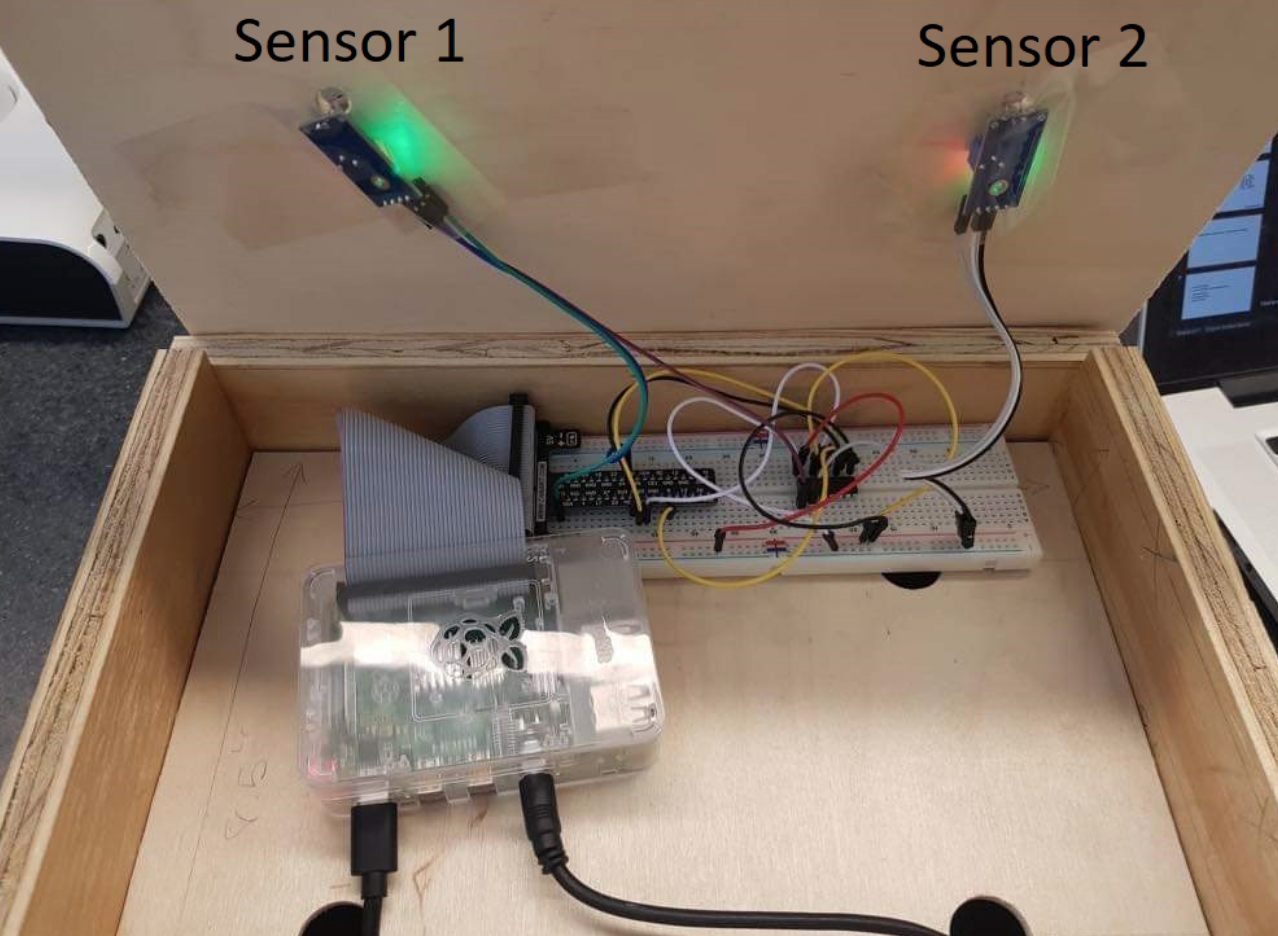 Figure 6. Design of the device

Figure 7 shows the interface of the OpenChirp for our data series. 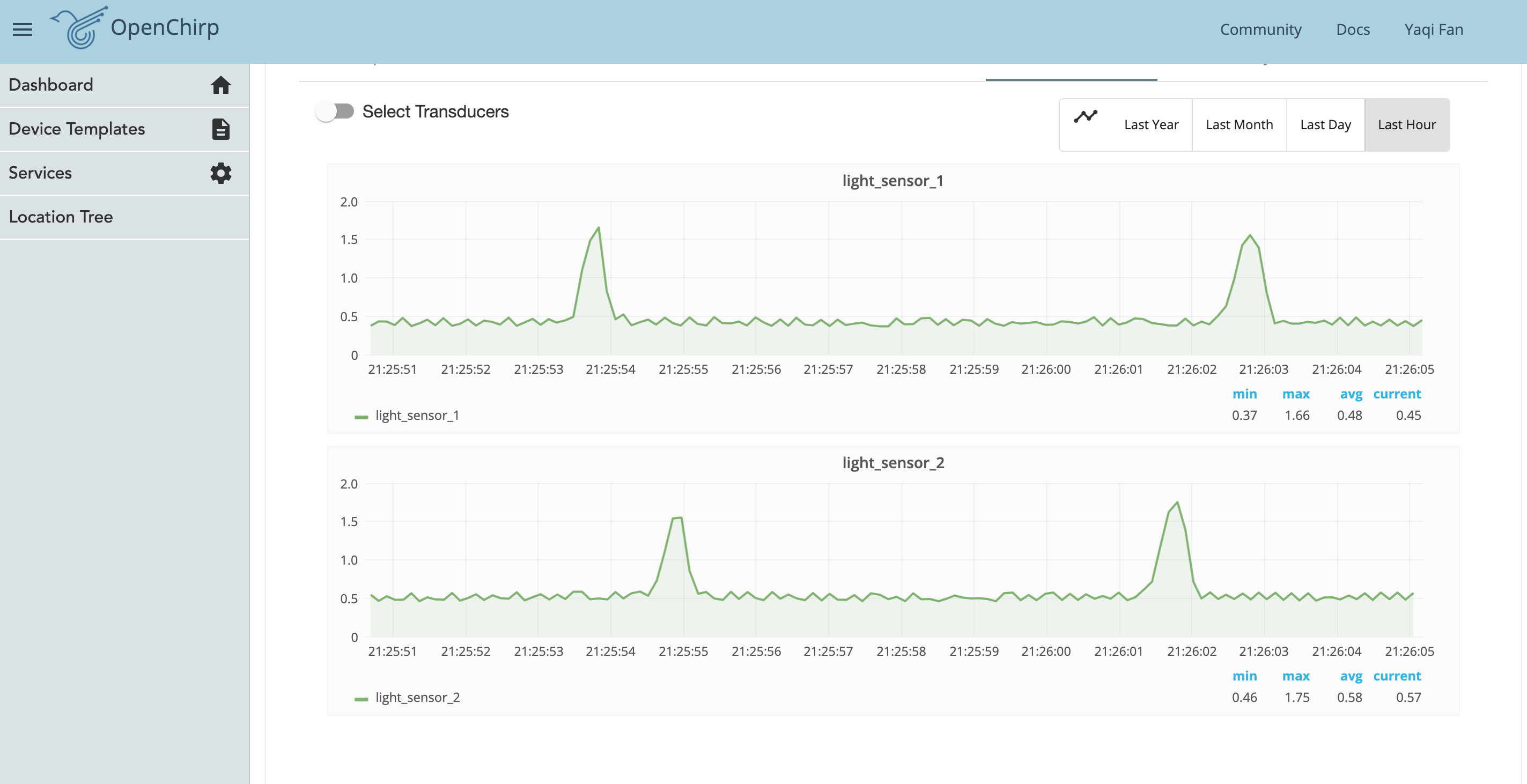 At first, A voltage jump in the left sensor is detected and then a few seconds later it went back to normal while there was another voltage jump in the right sensor. This implies there was a hand over the left sensor blocking the light first and in a few seconds, it moved to the right one. Therefore, this part is a hand motion of left to right. Similarly, it is applied to the right part.

In this project, Team AD implemented the hand movement control of slides and music player by using light sensors, A/D converter, and Raspberry Pi. Team AD also uploaded our real-time data to the OpenChrip to create the IoT device. With the completion of the project, Team AD get a deeper understanding of (1) the principles of various sensors, (2) the circuits analysis, (3) Linux commands and Python programming, (4) A/D conversions and signal processing.

For now, the device still has some places can be improved. (1) Firstly, certain intervals are required for each movement. The sensor needs a certain time to initialize once it fails to detect a movement or just finish the previous detection, which sometimes results in a lack of smooth operation. (2) Secondly, the device only contains two light sensors, so it can’t enable more complex motion control. With two sensors, it could detect five types of movement at most (left-to-right, right-to-left, left-dark, right-dark, both dark). If more sensors are included in the device, it can explore more complex movements. However, the extraction and combination of signals will also become more difficult.